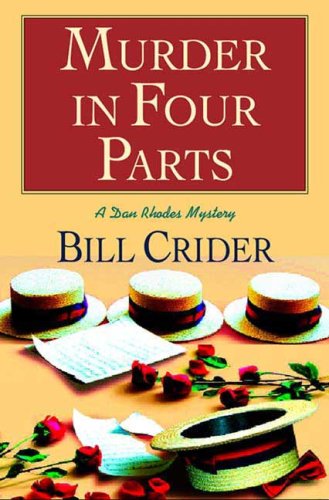 Sheriff Dan Rhodes claims he can't join the Clearview Community Barbershop Chorus because he's too busy “busting crime twenty-four hours a day” in Crider's wryly humorous if somewhat sleepy 16th sleuthathon (after 2008's ). Chief among those crimes is the murder of Lloyd Berry, the chorus director and local florist, whose head somebody bashed in with a pipe cutter wrench. Also causing the Texas lawman considerable consternation is locating the owner of a chicken-eating alligator, calming down two feuding neighbors and dissecting the cause of the chorus's internal strife. Then there's the nude bozo doing jumping jacks in front of what Rhodes calls the Lawj Mahal, the big new law offices of the county's most successful attorney. Trying to solve the various puzzles leads Rhodes into some less than agreeable situations, like pulling a Charles Bronson—chasing a bad guy on top of a moving train—at the mystery's satisfying climax.