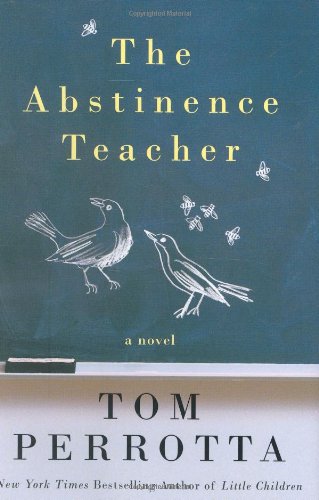 Tom Perrotta knows his suburbia, and in he carves out an even larger chunk of his distinct terrain. Set in the northeastern suburb of Stonewood Heights, Perrotta’s sixth book takes on the war between the liberals and the evangelists.

When single mother Ruth Ramsay, the sex ed teacher at the local high school, tells her class that oral sex can be enjoyable, the Tabernacle of the Gospel Truth church begins its crusade. Believable or not, the school agrees to an abstinence curriculum and in marches JoAnn Marlowe with her blonde hair and pumps to instill in Ruth the tenets of the new program. Gone are the days of rolling a condom over a cucumber; now Ruth is required to promote restraint, which she does wearily and halfheartedly.

These are heady days, when students rat out their teachers and the local soccer coach—Ruth’s daughter is on his team—is a divorced ex-druggie and active Tabernacle member. When Tim leads the team in prayer, Ruth wrenches her daughter from the circle and the hostility between the opposing camps grows.

Who is bad and who is good? Ruth’s youthful promiscuity rises slowly to the surface, while Tim’s struggle to stay sober makes him constantly confront his past. He’s lost his wife and daughter—also on the soccer team—to his addictions, but now he’s clean and married to a Tabernacle girl. His Jesus-loving ways, however, are in direct conflict with his desires, rendering him the most complex and likable character. When he loses his own battle with abstinence at a poker party, the finest scene in the novel culminates with his keying “Jesus” across the hood of an SUV parked in the drive. Ruth would gladly have sex if it would only come her way, and she also drinks on school nights. A less well-drawn complement to Tim, Ruth is a tolerant liberal with a newly toned body who plays therapist to her gay friends, but who can’t accept that her children are interested in Jesus.

The lesson is that everybody must give up something. Even Ruth’s ex-lover, once a pudgy trumpet player, no longer eats to maintain his abs of steel. So what is lost when we cannot succumb to our desires? Who then do we become? The book is rife with Perrotta’s subtle and satiric humor (the Tabernacle is seen as a place of diversity, while the punks, Deadheads and headbangers of Tim’s past are all predictably the same), but these questions get lost as the plot winds down. Issues of sex and religion that have shaken the town become, in the end, the story of what Ruth and Tim’s newly forged relationship will soon become.