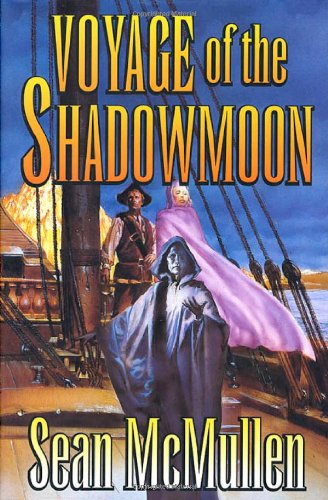 VOYAGE OF THE SHADOWMOON

Fans of McMullen's epic far-future SF Greatwinter trilogy (, etc.) will be pleased to find that the Australian author has brought his world-building expertise to his first fantasy novel, eschewing the genre's typical cookie-cutter black vs. white conflicts. Emperor Warsovran plots to take over the world with Silverdeath, a legendary weapon buried centuries ago in a ravine for fear that its awesome power would be misused. When Warsovran digs Silverdeath up and unleashes its wave of immense heat on the continent of Torea, the only survivors are the motley crew of the schooner , a cargo vessel with some curious enhancements and a decidedly secret mission. Aboard the are several individuals bent on countering or even stealing Silverdeath. As various lords and nobles scramble to take advantage of the power vacuum created by Torea's destruction, alliances crumble and reform. Boatmaster Feran Woodbar, the warrior Roval Gravalios and his companion, vampyre Laron, warring priestesses of the nearly extinct Metrologan Order and a host of dispossessed royalty bent on revenge are among the large cast of distinctive characters portrayed with wit and skill. McMullen has once again crafted a marvelously unpredictable and intricate story, full of swashbuckling intrigue and adventure on a grand scale.