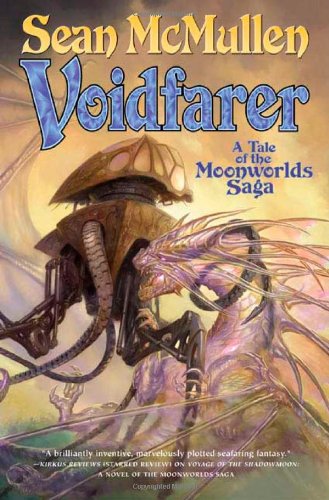 In Australian author McMullen's zany, if somewhat choppy, reworking of , his third Moonworlds novel (after 2004's ), sorcerers from the nearby planet Lupanar invade the world of Scalticar, traveling in cylinders that include such familiar Wellsian trappings as tripod fighting machines equipped with heat rays. The poorly led defenders have few weapons more advanced than bows and arrows. Fortunately, Insp. Danolarian Scyverin of the Wayfarer Constables can turn for help to such friends and allies as the 87-pound Constable Riellen, gifted at both mayhem and rabble-rousing; Constable Waller, in the form of a talking cat; and a beautiful and shrewd woman, Lavenczi, for whom the inspector has conceived a passion. While Lavenczi is under a magical glamour that keeps her from being touched, she still has the wits to capture two of the Lupanians' fighting machines and turn them against their creators. Fans of Wells's masterpiece will revel in this fantasy; others may find the frequent scene shifts and large cast of characters more confusing than not.