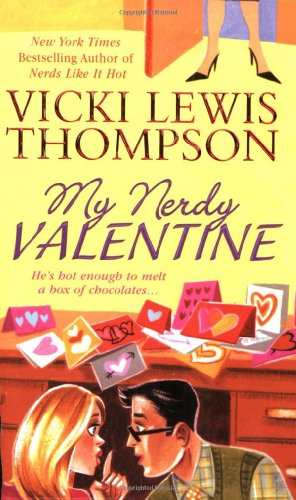 What do you get when you throw together a sexually repressed college student, a narcissistic sex therapist, a handsome stockbroker and a bevy of sex-crazed therapy patients? Answer: This absurd romantic comedy, which substitutes puerile sex puns for emotional heft. Thompson stretches her "nerd" premise thin, forcing the label on stockbroker William Sloan simply because he wears a winter hat with earflaps. However, William's nerd status doesn't keep him from being pursued by therapist Gloria, who besieges him with double entendres ("I'm glad to have a young and virile man handling my... assets"), glow-in-the-dark condoms and a flash of her breasts. Meanwhile, the object of William's affection, Gloria's studious intern, Amanda, refuses to work him into her busy schedule and accuses him of sending her crude, anonymous Valentines. Thompson throws in a hokey plot involving the true Valentine sender and his plan to kidnap Amanda, but this merely serves as a flimsy tool to push William and Amanda together. All in all, Thompson's newest romance (following ) possesses as much substance as cotton candy with less satisfaction.