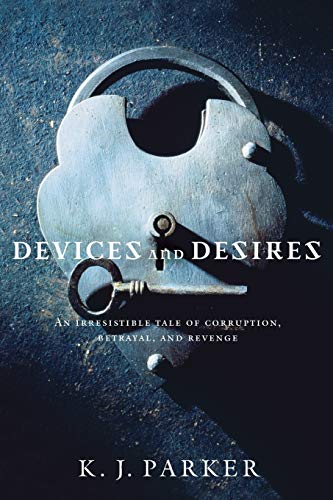 Devices and Desires: The Engineer Trilogy, Book One

Parker (the Scavenger trilogy) raises the bar for realistic fantasy war craft with this series opener. When the engineering guild sentences Ziani Vaatzes to death for improving on its supposedly perfect specifications for mechanical toys, he manages to escape Mezentia and throws in his lot with its recently defeated enemy, city-state Eremia. In exile, Vaatzes sets up shop making weapons, but his real goal is to create a new kind of engine—one made of human components, designed to reunite him with his family. He painstakingly executes a slow-moving master plan involving love, betrayal and secrets among the two countries' leaders. The tragic aftermath of the climactic battle forces a rereading of all that went before. It takes some hard slogging to get through assiduously researched technical descriptions of everything from dressing a duke to hunting a boar, and a few too many coincidences and expository speeches mar Parker's otherwise exquisite feat of literary engineering.