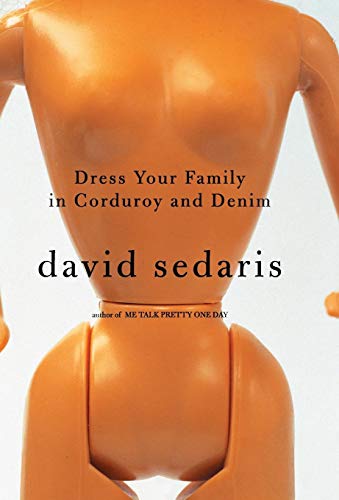 DRESS YOUR FAMILY IN CORDUROY AND DENIM

In his latest collection, Sedaris has found his heart. This is not to suggest that the author of and other bestselling books has lost his edge. The 27 essays here (many previously published in , . or the , or broadcast on NPR's ) include his best and funniest writing yet. Here is Sedaris's family in all its odd glory. Here is his father dragging his mortified son over to the home of one of the most popular boys in school, a boy possessed of "an uncanny ability to please people," demanding that the boy's parents pay for the root canal that Sedaris underwent after the boy hit him in the mouth with a rock. Here is his oldest sister, Lisa, imploring him to keep her beloved Amazon parrot out of a proposed movie based on his writing. (" 'Will I have to be fat in the movie?' she asked.") Here is his mother, his muse, locking the kids out of the house after one snow day too many, playing the wry, brilliant commentator on his life until her untimely death from cancer. His mother emerges as one of the most poignant and original female characters in contemporary literature. She balances bitter and sweet, tart and rich—and so does Sedaris, because this is what life is like. "You should look at yourself," his mother says in one piece, as young Sedaris crams Halloween candy into his mouth rather than share it. He does what she says and then some, and what emerges is the deepest kind of humor, the human comedy.