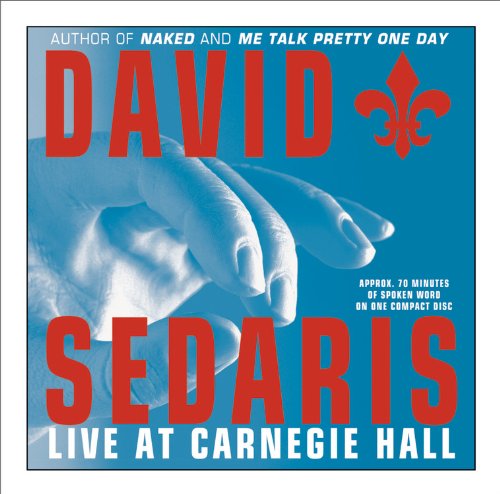 Bestselling humorist Sedaris likes to test out new material on twice-a-year reading tours to get the rhythm and phrasing perfected before he puts them down on the page. This live recording of his October 22, 2002, reading at Manhattan's Carnegie Hall finds Sedaris performing seven hilarious new pieces and taking a few questions from his audience. As uproarious as Sedaris is on the page, he's even funnier reading his wickedly jaundiced reflections. With brilliant deadpan timing, Sedaris is a charm, whether being coaxed into purchasing his clothes in the women's department by his sister Amy ("I'm the guy in a crowded steak house removing a jacket with the label reading 'Sassy Sport'") or untangling the Dutch legend of St. Nicholas and his "six to eight black men" slaves/assistants or trying to explain to guests—in French—that his boss has a rubber hand. Sedaris reaches his pinnacle of hilarity describing his purchase of the "Stadium Pal," an exterior catheter marketed to "sports fans, truck drivers and anyone else who's tired of searching for a bathroom." He praises the "freedom leg bag" that conveniently attaches to the user's calf: "The bag can be emptied and reused up to 12 times, making it both disgusting and cost-effective." This concert CD should have fans panting for Sedaris's next collection, which is due in June 2004.