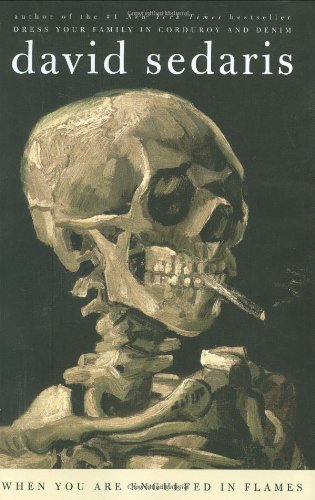 When You Are Engulfed in Flames

Sedaris, king of the poignantly absurd, triumphs in this sixth essay collection (after 2004's ). There is less focus here on the Sedaris clan as a whole, though the various members make memorable and often hilarious appearances. In “The Understudy,” the Sedaris siblings band together to battle the odious babysitter Mrs. Peacock, while in “Town and Country,” Sedaris and sister Amy discuss what their father would be most offended to find on his daughter's coffee-table (hint: comes in a distant second). Leaving America behind, Sedaris also regales readers with his experiences around the globe, from sitting in a Parisian doctor's office wearing only his underwear in “In the Waiting Room” to warding off birds in the French countryside with record albums in “Aerial.” In the collection's longest essay, “The Smoking Section,” Sedaris recounts his three-month stay in Tokyo, where he successfully quits smoking and unsuccessfully attempts to learn Japanese. Sedaris records in “Buddy, Can You Spare a Tie?” his more glaring mistakes in life, but he should be satisfied with the knowledge that this latest endeavor is anything but.