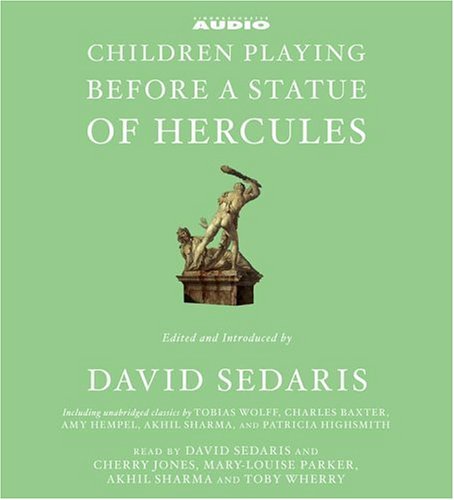 Children Playing Before a Statue of Hercules

This recording of five stories from Sedaris's longer print collection of the same name is a brief but delightful audio treat. The stories vary widely in theme and style, but each is powerfully emotive and paired with an excellent narrator. Of particular note are Cherry Jones's rendition of Patricia Highsmith's farcical "Where the Door Is Always Open and the Welcome Mat Is Out," and Parker's take on Amy Hempel's "In the Cemetery Where Al Jolson Is Buried." In the former, Jones perfectly captures the well-intentioned but ill-fated preparations of a woman who has moved to Manhattan from Ohio and is awaiting a visit from her perfectionist sister, and in the latter, Parker delivers a poignant performance of a friend's bittersweet musings on the death of her friend. Hearing Sedaris read an offbeat, deeply personal story not his own is another of this audio's many pleasures. While Sedaris has grown famous for his reading style, his earnest portrayal of youthful admiration and his spot-on characterization of a quirky substitute teacher in Charles Baxter's "Gryphon" demonstrate his range as a storyteller—and show that much more than his high pitch makes him such a distinctive voice in modern literature.