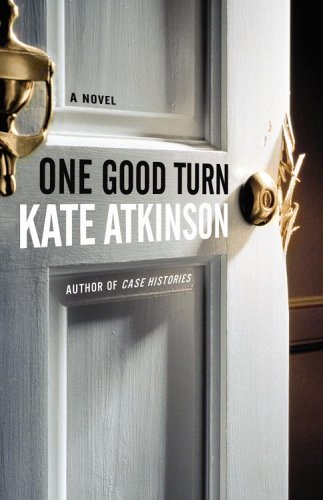 Having won a wide following for her first crime novel (and fifth book), (2004), Atkinson sends Det. Jackson Brodie to Edinburgh while girlfriend Julia performs in a Fringe Festival play. When incognito thug "Paul Bradley" is rear-ended by a Honda driver who gets out and bashes Bradley unconscious with a baseball bat, the now-retired Jackson is a reluctant witness. Other bystanders include crime novelist Martin Canning, a valiant milquetoast who saves Bradley's life, and tart-tongued Gloria Hatter, who's plotting to end her 39-year marriage to a shady real estate developer. Jackson walks away from the incident, but keeps running into trouble, including a corpse, the Honda man and sexy, tight-lipped inspector Louise Monroe. Everyone's burdened by a secret—infidelity, unprofessional behavior, murder—adding depth and many diversions. After Martin misses a visit from the Honda man (Martin's wonderfully annoying houseguest isn't so lucky), he enlists Jackson as a bodyguard, pulling the characters into closer orbit before they collide on Gloria Hatter's lawn. Along the way, pieces of plot fall through the cracks between repeatedly shifting points of view, and the final cataclysm feels forced. But crackling one-liners, spot-on set pieces and full-blooded cameos help make this another absorbing character study from the versatile, effervescent Atkinson.