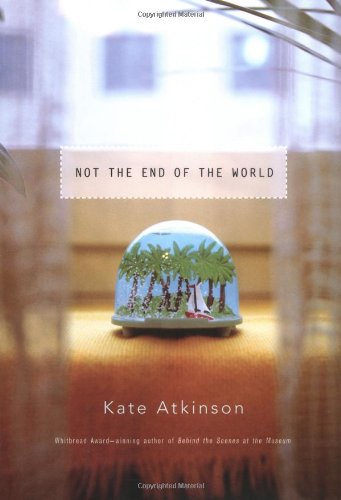 Atkinson, who began her career with , a Whitbread Book of the Year, and enjoyed good reviews for two more novels, now gathers together this suite of comparatively loosely connected stories. Atkinson's work has grown increasingly diffuse; her most recent book, , was printed in three fonts, representing separate strings of narrative. This collection takes that conceit—without the typesetting extravagance—one step further, opening and closing on two women who seem to tell one another the intervening tales. Atkinson's Scheherazades, singletons of indeterminate age named Charlene and Trudi, appear first in "a food hall as vast as a small city," and by the book's end—which may or may not be the end of the world—they're starving to death in a squalid, freezing flat in what feels like an apocalyptic present. In the women's restless imaginations, readers meet more than one girlfriend (in different stories, and each unbeknownst to the other) of a man named Hawk; a gaggle of perfect-toothed American Zane sisters; and a governess who may or may not be a goddess. Some of Atkinson's devices—a giant cat who impregnates a woman with kittens, an evil twin who gets to have all the fun—make for stories as simple as fables, but some, like the nanny goddess and the virtuoso, multiple-voiced "Dissonance," are sharp and memorable, full of astutely observed family dynamics. While not as intense or as unified as Atkinson's full-length work, this is a sharp and wholly original collection.