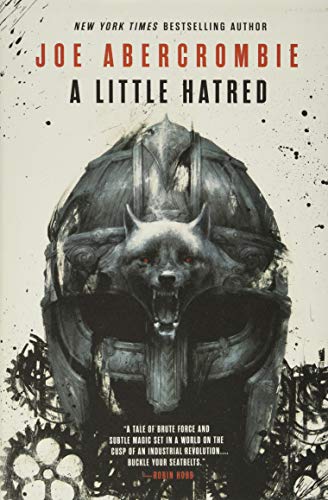 Abercrombie expands the First Law fantasy universe with a new epic saga of war and power set in a world where the industrial age is rising. Rikke’s Long Eye, a somewhat reliable prophet, foresees a battle in the North, but she doesn’t expect Northern warrior Stour Nightfall and his men to come looking for her. Luckily, she escapes, reuniting with her father, the Dogman; a friend, hotheaded Leo dan Brock; and Leo’s mother, Lady Governor. Together they fight for glory against superior Northern forces. Far away, Prince Orso is hungering for a cause, and when the Northern attacks worsen, he finds it. Without the funds for an expedition, he persuades Savine dan Glokta, his lover, to invest in his army so he can support the Dogman and the others. Meanwhile, rumblings of rebellion emerge as workers suffer. Business-savvy Savine sees an opportunity in the unrest—but when she travels to the industrial city Valbeck, revolutionaries seize control of the city, destroying factories and taking hostages. Orso and his new army are ordered to Valbeck to put down the insurrection, leaving the Dogman, Leo, and Lady Governor stranded and forced to make difficult choices. This isn’t a bad starting point for new readers, but returning fans will get the most out of it, as these characters are the heirs and descendants of the previous books’ protagonists. With expert craft, Abercrombie lays the groundwork for another thrilling trilogy. Agent: Robert Kirby, United Agents (U.K.). (Sept.)
close
Details