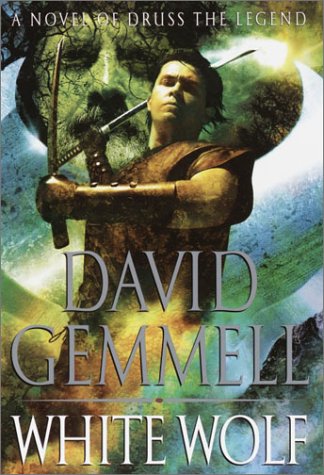 This new heroic fantasy in Gemmell's engrossing Drenai series takes place immediately before his first published novel, (1984), but stands well on its own. Skilgannon, swordmaster and former general of Queen Jianna's army, walked away from the queen's service after his forces sacked a city with such savagery that his name is ever after followed by "the Damned." He's spent three trying years submitting to monastic discipline in hopes of understanding the places of man and evil in the world. His dreams are disturbed by a white wolf; his thoughts by memories of his dead wife and hopeless love for Queen Jianna. Now the surrounding town is torn by civil unrest and the monks debate fleeing: Skilgannon might have stayed with them but for the price on his head and the futility of his disguise as Brother Lantern. The abbot sends him to the capital, Mellicane, escorting an unworldly monk. In the woods outside town, they pick up the boy Rabalyn, whose troubles with a town bully ended with the torching of his aunt's house and the killing of the aunt and the bully; his ne'er-do-well parents are said to be in the capital. Thus begins a journey that will continue beyond Mellicane and draw in the author's most famous character, Druss the axeman. The plot seamlessly supports the predictable violence. Magic plays little part in everyday life, but when it affects the deeds of rulers and leaders, Gemmell describes it in a concrete, nuts-and-bolts way in welcome contrast to much airy-fairy fantasy.