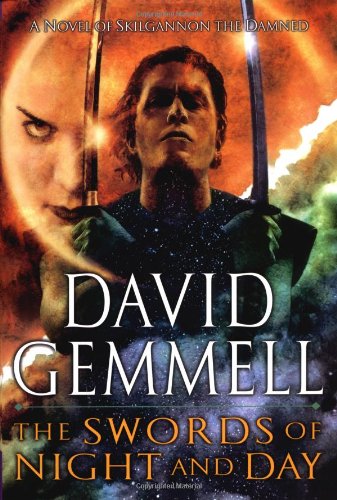 THE SWORDS OF NIGHT AND DAY

In this engrossing science fantasy, the latest in British author Gemmell's long-running Drenai series ( , etc.), 1,000 years have passed since the age of the heroic sword fighter, Skilgannon. A priestly class has reawakened ancient technology that allows them to prolong life indefinitely, create lycanthropic man-beast combinations called Jiamads and fashion magical weapons such as the two legendary blades Skilgannon once carried, the Swords of Night and Day. The greatest of the priests, Landis Khan, brings Skilgannon back to life in order to fight against the arrayed armies of another of Landis's resurrections, the empress Eternal—aka Queen Jianna, Skilgannon's former lover and nemesis. Druss the Legend, the ax-fighter friend of Skilgannon from the past, has also been brought back in body. Skilgannon and Harad, the clone of Druss, join forces with Askari, a clone of Jianna, and various temporal locals, in a fight against the Eternal's Mongol-like hordes of were-creatures and ravaging soldiers. Though the story brims with standard swordplay and unremarkable battle sequences, the puzzling out of what a possessed sword might actually be (a nanotech-based artificial intelligence?), or how resurrection works (bio-engineered cloning?) provides delightful diversion and should make this one popular with idea-starved fantasy readers.