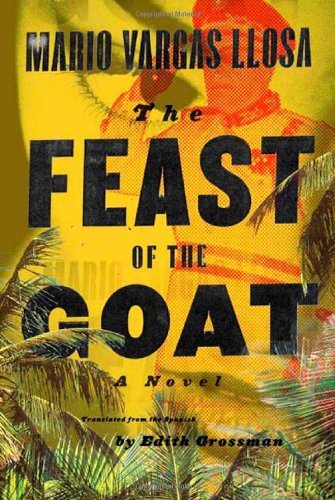 THE FEAST OF THE GOAT

"This wasn't an enemy he could defeat like the hundreds, the thousands he had confronted and conquered over the years, buying them, intimidating them, killing them." So thinks Rafael Trujillo, "the Goat," dictator of the Dominican Republic, on the morning of May 30, 1961—a day that will end in his assassination. The "enemy" is old age—at 70, Trujillo, who has always prided himself on his grooming and discipline, is shaken by bouts of incontinence and impotence. Vargas Llosa divides his narrative between three different story lines. The first concerns Urania Cabral, the daughter of one of Trujillo's closest associates, Agustín Cabral. She is 14 at the time of the Trujillo assassination and, as we gradually discover, was betrayed by her father to Trujillo. Since then, she has lived in the U.S. At 49, she impulsively returns on a visit and slowly reveals the root of her alienation. Urania's character is a little too pat, however. Vargas Llosa's triumph is Trujillo's story. We follow the sly, vile despot, with his petty rages, his lust, his dealings with his avaricious family, through his last day, with mingled feelings of repulsion and awe. Like Stalin, Trujillo ruled by turning his rage without warning against his subordinates. Finally, Vargas Llosa crosscuts Urania's story and Trujillo's with that of Trujillo's assassins; first, as they wait to ambush him, and then as they are tracked down, captured and tortured to death, with almost medieval ferocity, by Trujillo's son, Ramfis. Gathering power as it rolls along, this massive, swift-moving fictional take on a grim period in Dominican history shows that Vargas Llosa is still one of the world's premier political novelists.

The Day of the Goat.