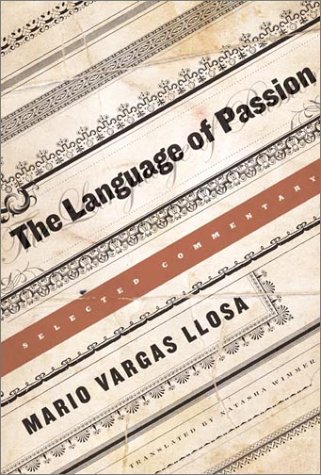 THE LANGUAGE OF PASSION: Selected Commentary

In the United States, Vargas Llosa is best known for his novels (; etc.), but in Spanish-speaking countries, he's also noted as a thoughtful, intense newspaper columnist. His essays on the machinations of countries like Argentina and his native Peru have shed light on their politics and provided some material for a previous collection, . In this second culling from his newspaper life, Vargas Llosa provides plenty of political meat for a newshound, but also displays his wide range of interest. From the first essay, about a romance writer who left her life savings to found a book award for—what else—romance writers, Vargas Llosa sparkles. He sometimes digresses into minor diatribes about culture and government, but he mostly strikes a balance between fierce passion for a subject and the journalistic objectivity that allows for proper analysis of it. Vargas Llosa writes, "I try to comment on some current event that rouses, angers, or disturbs me, subjecting it to the test of reason and in the process weighing my convictions, doubts, and confusions." He often succeeds in reaching this goal, applying his fascination with humanity to such diverse topics as Bob Marley's shrine, the legacy of Vermeer and daily life in a Palestinian village. Sweeping, intelligent and lively, these essays should widen Vargas Llosa's appeal considerably, allowing new readers to share his passion. The translation (by contributing editor Wimmer) is superb, allowing Vargas Llosa's wit and intellect to be delivered in English while retaining its Spanish flavor.