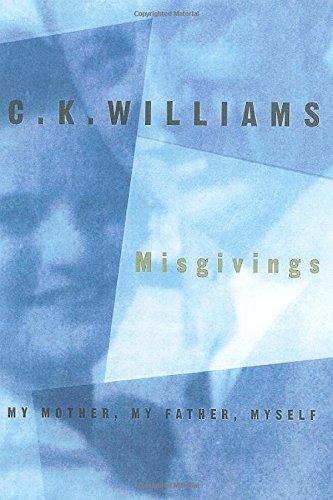 Misgivings: My Mother, My Father, Myself

Award-winning poet Williams (Repair; The Vigil) forays into nonfiction with this meditative, tense memoir about family hurt, disappointment and rage. The book starts off promisingly with a philosophical, authorial distance, suggesting Williams's signature intelligence and concern: standing over his dead father, he exclaims, ""What a war we had!"" and then muses, both detached and pained, about why a son would think primarily of war instead of love at his father's death. But the narrative soon turns tedious as Williams lists the grievances he holds against his dead parents. His father, a successful salesman, was unpredictably angry, loving, cruel and generous; he ""treated his children like employees"" but gave away cars to relatives and friends (though he did finance his son's dream of becoming a writer). His erratic behavior was clearly disruptive and confusing, but Williams, taking the stance of the righteous son, seems more interested in defending himself than providing readers any real insight into his father. Similarly, he draws a vague outline of his mother, characterizing her as ""essentially a child"" who, having grown up poor, loved nothing more than shopping and acquiring material goods. These grievances come off as both petty and inflated. Although the author makes faint attempts to be sympathetic to his parents, detailing some happy childhood memories and wondering what went wrong, he seems obsessed with his father's failures, repeatedly speculating about the older man's questionable morality, his unhappy marriage and his Faustian bargains. In the end, all justification for his father's behavior fall away and what's left is the son's attempts to express his hurt. Williams's fans will have a difficult time watching such a characteristically direct and honest poet complain about a decades-old wound that clearly remains unhealed. (Apr.)
close
Details