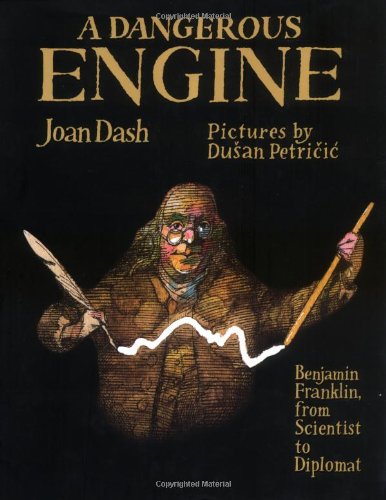 A Dangerous Engine: Benjamin Franklin, from Scientist to Diplomat

In this uneven biography, Dash ( ; ) explores Benjamin Franklin's evolution from scientist to diplomat before and during the Revolutionary War. The chapters devoted to science prove the most compelling, as Dash describes his impact as a scientist, from his invention of the bifocals, to his famous kite experiment with electricity to his "sentry-box" experiment (an early version of the lightning rod), which he described in a letter to the Royal Society and made him famous throughout Europe. Though science interested him most, Franklin gravitated more towards politics, first in Britain and then as the person most responsible for France's support of the American Revolution. ("The reason seems to have been his deep-seated belief that science was a pleasure, a luxury, while public life, especially in difficult times, was far more important than the desires of one individual," Dash asserts). Britain's ambassador to France, Lord Sturmont, was understandably mistrustful: "I look upon [Franklin] as a dangerous Engine." However, the section focused on this political period lacks the spark of the earlier section about his scientific endeavours, and often seems to meander. The insightful, sometimes whimsical and worldly illustrations by Petricic capture the spirit of the man and the times. But ultimately, the text never quite adds up to a clear portrait of Franklin, his interests and his beliefs. Ages 10-up.