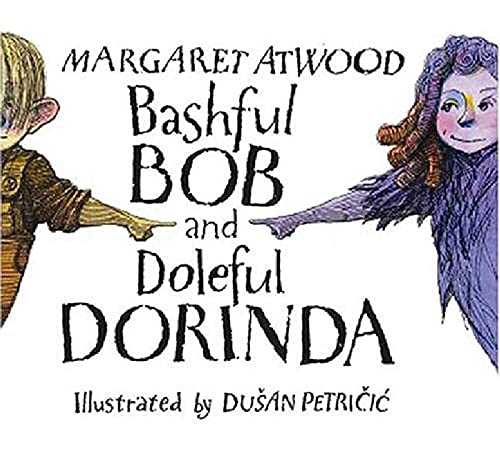 In this alliterative trifle by Atwood, who previously wielded consonants in , two homeless urchins form a fabulous friendship. Bob has been "abandoned... beside a beauty parlour" by his mother, whose new hairdo leaves her "so blinded by her burnished brilliance that baby Bob was blotted from her brain." Three dogs (a boxer, a beagle and a borzoi, naturally) adopt Bob, who takes to hiding in bushes and barking. Not far off lives Dorinda, whose parents "disappeared in a dreadful disaster." Her wealthy relatives "didn't dole out a dime," make her sweep and wash ("Drat these darned dirty dishes," she curses). In ink-line illustrations washed with monochrome watercolor, Petricic color-codes Bob in warm gold and ochre, and Dorinda in lavender, pink and blue. When one child's tale of woe takes the foreground, the other can be seen in the distance, so they are never far from one another. The two finally meet, and Dorinda coaxes Bob to read and speak; together they pacify a raging buffalo that escapes from a zoo. Ultimately, Atwood restores their parents, who "bought a bungalow" for all, dogs included. Happy ending notwithstanding, the title waifs are crushed under the perversely prolific wordplay, and the excessive s and s lose their comedic zing after a few paragraphs. Ages 5-up.