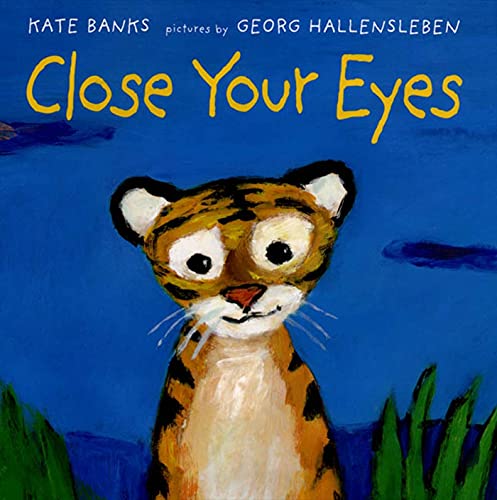 Banks and Hallensleben further develop the bedtime theme of and , this time with the antics of a restless tiger cub. On a sunny midafternoon in a tropical forest, a mother tiger persuades her son to take a nap. "If I close my eyes, I can't see the sky," the mischievous tiger protests, in a portrait framed by the white page. "Yes you can.... You can even float among the clouds," his mother promises, as a fantasy spread pictures fluffy animal-shaped clouds and the little feline reclining in a half-moon; alternating full-bleed images like this one suggest the listener is relaxing into a dream. At last, the cub squeezes his eyes shut. "It's dark," he says. "Dark like your stripes," his mother observes. Banks styles the text as a give-and-take, while Hallensleben sets the jungle scene in impasto layers of sapphire, jade and aquamarine that complement the yellow-orange of the tigers' coats. Roughly hewn paintings depict the patient mother as a bona-fide predator, and her son as a cuddly fellow with bright black eyes, round ears and an upturned smile. Banks and Hallensleben conspicuously borrow the strategy of Margaret Wise Brown and Clement Hurd's classic , which similarly toggles between reality and reverie, and likewise ends with the mother having the last word. At this book's satisfying close, the son falls asleep as his mother promises to be there when he wakes. Ages 3-6.