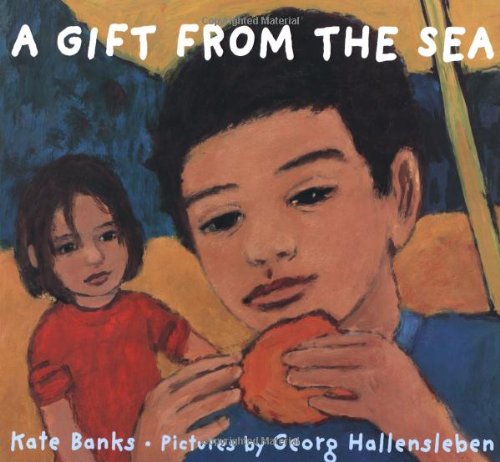 A GIFT FROM THE SEA

In this disarming reflection on permanence, the creators of find the sublime in an ordinary stone. They begin in the present, as a boy finds a reddish, potato-shaped rock on an ochre beach. The scene then shifts to conical silhouettes and primordial explosions: "He didn't know that the rock had been spewed from a fiery volcano and cooled in the shade of a thousand years." Additional spreads picture a luxuriant jungle, fierce dinosaurs and pale-blue glaciers before returning to the modern boy: "He felt the ridges and grooves of the rock. He rubbed its rough edges." Further flashbacks show the rock among cavemen and as a landmark in an ancient city; though marble columns topple, the stone remains. By the time the contemporary boy places his find beside his box of sea glass, the rock's astonishing history has been well established. Hallensleben contrasts intimate close-ups of the present with middle-distance views of the remote past. His contemplative paintings model the slow progress of time, and every image includes a glimpse of the iron-oxide-brown rock as it erodes to the size of a child's hand. By expressing wonder at a seemingly mundane object, Banks and Hallensleben challenge readers to see the universe in a grain of sand. Ages 3-6.