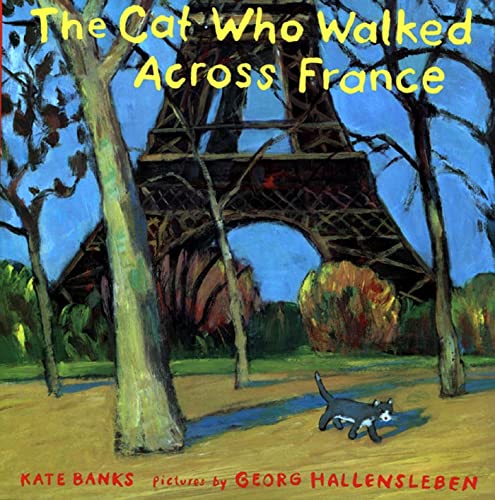 THE CAT WHO WALKED ACROSS FRANCE

In this sympathetic tale, a dislocated gray cat migrates from Rouen to St.-Tropez. (A back-cover map of France shows the traveler's zigzag itinerary.) Originally, the cat lives in southern France with his owner: "The old woman would scratch his ears and stroke his back./ 'Good kitty, good kitty.' " But when the woman dies (offstage), the cat and her belongings are sent north. A poignant image shows him sitting on a crate, looking out a window at dank, sandy-blue buildings. He takes to the streets, scrounging for food near the Rouen Cathedral, easing through verdant cow pastures and blending with the concrete grays at the Pont Saint-Michel near Notre-Dame in Paris. He passes over TGV tracks, shelters in the eaves of a cabin near the Alps and rests on a rock by an ancient Roman aqueduct. Yet he never lingers long, driven by "the tangy smell of lemons" or "the taste of the salty air... behind the stone house by the edge of the sea." The team behind ) tells an "incredible journey" narrative without overstating the drama or sentimentalizing the resolute cat. Hallensleben composes space like Matisse and loads his brush with paint like Van Gogh; his full-bleed spreads feature gorgeous tree-greens and drenching blue skies, and the quiet cat is a small, intense presence in the panoramic settings. Francophiles and cat fanatics will melt at the immensely satisfying conclusion, where the voyager achieves his long-sought contentment with his stone home's new occupants. Ages 4-8.