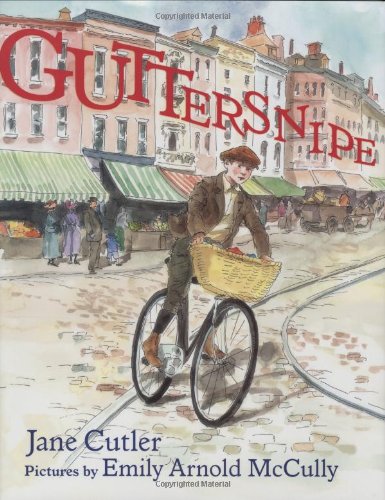 A family story inspired Cutler’s ( ) picture book about the struggles of Jewish immigrants in early-20th-century Canada. After his father dies, Ben’s family has trouble making ends meet, even when Mama works extra hours and Ben’s older siblings work full-time. Eager to help, Ben lands a job tryout with Mr. Green the hatmaker, delivering hat linings to the factory across town, via bicycle. His first run ends in disaster—sending boy, bike and linings tumbling on a busy thoroughfare, and eliciting the name-calling of the book’s title. But Ben’s crash ends up being an epiphany. Cutler’s text effectively captures its setting and a family’s sense of urgency in tough times. Oddly, the author doesn’t explain the term “guttersnipe,” other than noting that Ben knew it was an “ugly word.” McCully’s ( ) watercolor renderings of period clothing, streetcars and colorful storefronts along cobblestone streets give the book a strong sense of place. And her scenes of the rainbow-hued hat linings taking flight are a perfect match for the story’s upbeat ending. Ages 5–8.