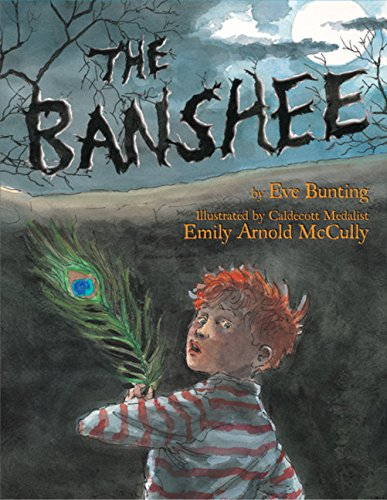 When Terry, a young Irishman, is wakened by the sound of wailing outside, he's worried that a banshee (the Gaelic omen of death) is coming for his frail brother, Liam. Reasoning that even a ghost may be open to a bribe, Terry ventures into the backyard with his “best thing,” a prized peacock feather: “I'd give it to her. Then I'd ask her to go away and leave our family be.” Bunting's evocative prose (“It's December in Ireland. Cold. The linoleum is ice under my feet”) and McCully's moody nocturnal scenes, lit by harsh moonlight, make Terry's fears and ruminations vivid. And all the pieces of a ghost story are there: a remote, dead-of-night setting in a land well-known for magic; the sense of isolation that fear can trigger; eerie backstories and details (a banshee, readers learn, wears “a long black robe, like a nun's, only hers was made of cobwebs”). But these elements don't quite coalesce into a genuine chill. Ultimately, it feels like Bunting and McCully (who previously teamed up for ) want to reassure readers rather than leave them with goose bumps. Ages 5–8.