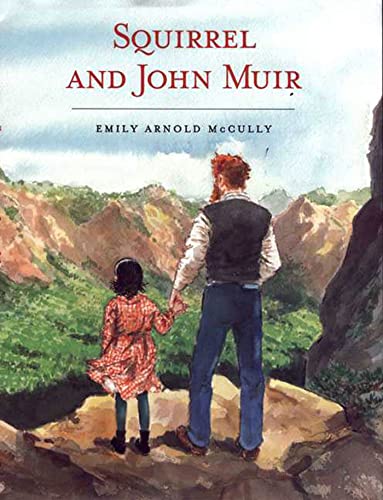 McCully ( ) uses history and biography as a springboard to a story about how naturalist and writer John Muir befriended a child who shared his love of the outdoors. In 1868 (according to the author's note), James Hutchings and his family are making a go of a hotel business and of leading guided tours in the Yosemite Valley. The oldest Hutchings child, a spirited girl nicknamed Squirrel (so-called for her tendency to dart about), continually tries the patience of her parents and the hotel guests. But when Muir arrives one day, looking for work, Squirrel has more than met her match. In between his chores, he studies the landscape hoping to prove his theory of glacial formation. He also luxuriates in the area's natural wonders, encouraging Squirrel to do the same. McCully portrays Muir's breakthrough—when he is able to prove his ideas to be scientifically sound—as the natural progression of his daily observations. His forays into the wild, shown through Floy's perspective, seem like simple hikes but add up to a larger purpose. When Muir earns a following, an angry Hutchings asks the man to go, but not before he leaves Squirrel (and readers) with a parting gift. McCully again cultivates the seeds of fact into a vivid imagining of what might have been. She creates instantly memorable characters in the spunky tomboy Squirrel—replete with petulant poses and facial expressions—and young-at-heart Muir. And Yosemite, in its unspoiled glory, comes alive via McCully's sun-dappled watercolor scenes, lush with green trees and dusty rock faces alongside swift moving rivers and white splashes of waterfall. Ages 4-8.