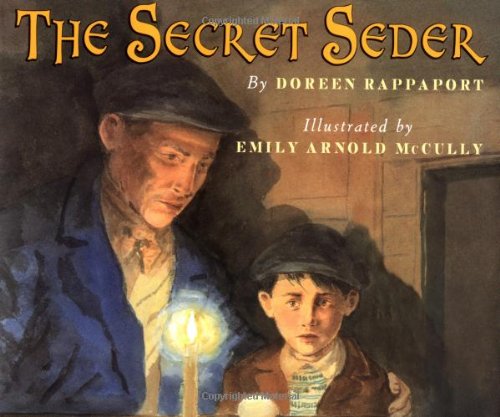 A boy comes to appreciate the true depth of his faith in this picture book about European Jews who took great risk to secretly practice their religion during the Holocaust. Young Jacques and his parents escaped Paris during Hitler's occupation and are now in hiding, posing as Catholics in a small French village. Jacques fears the "black-boot men" always on patrol in the streets and has become adept at acting "natural" and staying out of their way. But not even the threat of soldiers can stop Jacques from learning the Four Questions in time for Passover; he plans to surprise his father during the secret Seder they will attend. Under cover of night, several Jewish men gather in a mountaintop cabin to celebrate, pray and remember. An older man reads the Haggadah, keeping to tradition as much as possible with a bare minimum of food or supplies, and helps inspire the men to a hopeful mood. Using a confident storytelling style and realistic characterizations, Rappaport ( ) captures the electric energy of suspense and danger swirling around Jacques's family as well as the courage and abiding faith that bolster them and their fellow Jews in the shadow of atrocity. McCully's ( ) watercolors depict sun-dappled village streets and storefronts as well as the shadowy green mountainside with an equally palpable sense of place. The portraits of Jacques and the Jewish men—ranging from tense to anguished to ultimately somewhat peaceful—bring the tale (inspired by real events, as mentioned in the author's note) to life. Ages 5-9.