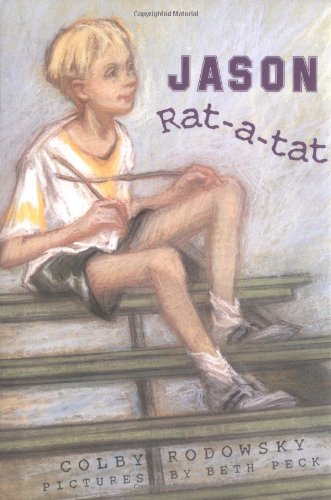 Geared to readers ready for chapter books, Rodowsky's ( My ) slim story centers on a nine-year-old whose entire family is enamored of ball games. Everyone except Jason, that is. He is a good sport about being dragged along to his brother's baseball games (their father coaches the team) and his sister's soccer games (their mother is coach of team), but he's just not interested. At practices and games, he concentrates on deciphering animal shapes among the passing clouds or constructs a fort near the bleachers with his best friend. And he spends much of his time making music with makeshift instruments: he toots songs through paper-towel rolls, plays imaginary piano along the edge of his desk and sounds a "rat-a-tat" by hitting pencils or sticks against various surfaces. In a rather contrived scene, Jason suddenly realizes that he wants to play the drums while he and his family watch a marching band perform in the Memorial Day parade. Readers will immediately guess the contents of the large box that Jason's visiting grandfather presents to the child soon thereafter. Though kids with interests that differ from their siblings and peers may find reassurance in this tale, Rodowsky's usually nuanced writing is bland and her plot predictable. Final artwork not seen by . Ages 7-10.