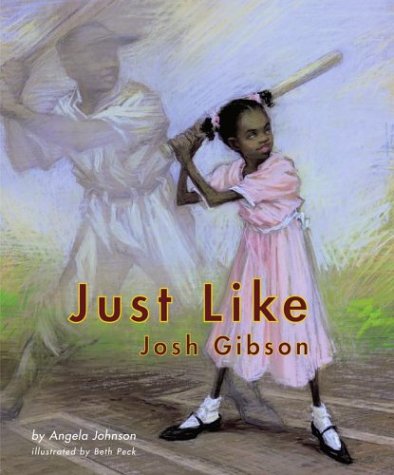 Identified in an endnote as the "Babe Ruth of the Negro Leagues," Josh Gibson serves as the catalyst to Johnson's ( , reviewed above) mildly girl-empowering baseball story. Sitting with her grandmother at the kitchen table, an African-American girl repeats Grandmama's tale of how her father showed up at the hospital "with a Louisville slugger and a smile. He said his new baby would make baseballs fly, just like Josh Gibson." Grandmama does play ball "once and again" when the boys let her (possibly echoing Gibson's own exclusion from the major leagues despite his talent). When Grandmama's cousin hurts his arm in a game one day, the girl steps in with a huge hit "just like Josh Gibson," her hero. In the best scene, Peck ( ) uses streaky pastels to portray the girl at bat in a pale pink dress and hair bows, smartly contrasting her determined expression with the rigidity of 1950s gender roles. Other scenes are hampered by characters' eerily skeletal limbs and limited emotional range. Everyone is nearly always smiling—even the young Grandmama as she stands outside the fence, watching the boys play without her. This glossing over of the girl's emotions weakens the text, too, which focuses on Grandmama's one day in the sun. Still, readers can't help but identify with the heroine when she joyfully participates in the sport she loves, however briefly. Ages 5-7.