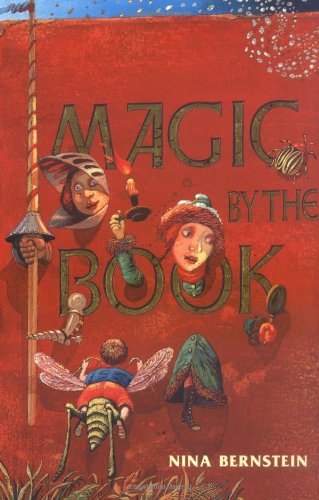 MAGIC BY THE BOOK

Lacing together strands of folklore, history and literature, Bernstein's ( ) debut children's book is a cleverly convoluted celebration of fantasy, of reading and of the imagination. Anne and Emily, sisters living in mid-20th century Queens, begin reading a "small, shabby volume" and discover that are characters in the story. In the first of three episodes, the girls suddenly find themselves in Sherwood Forest. The girls use their historical and literary knowledge to help Robin Hood and his band foil devious Prince John's plans to arrange for the execution of his brother, King Richard the Lion-Hearted. The girls' younger brother, Will, next enters the magical book, which transports him to a land of diminutive creatures called Gnomblins, who draft him to break a sorcerer's curse, which has caused all insects and bugs to expand to enormous proportions. Touches of humor keep the proceedings light ("The is silent, but we rarely are I'm afraid," the Gnomblins state by way of introduction), and a subtle message about literacy threads through Will's adventure. In the novel's final, most cryptic caper, all three siblings follow an interloper at their parents' garden party into the mysterious book to become players in a scene from Tolstoy's . Amusing anecdotes about the children's home life with their likeable, absentminded parents balance these fanciful, frequently suspenseful forays. Kulikov's voluptuous pen-and-ink chapter openers (which bring to mind Sir John Tenniel's work) contribute to the elegant storybook feel of the experience. Ages 10-up.