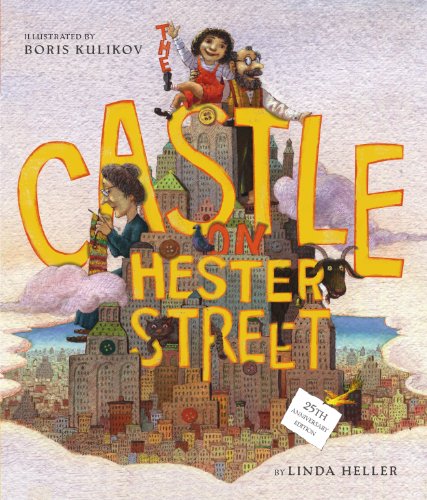 The Castle on Hester Street

Originally illustrated by the author, this 1982 Sydney Taylor Book Award winner receives spectacular new life by Kulikov ( ). Like the story, Kulikov’s illustrations are beguiling, witty and filled with enough details for dozens of readings. Julie’s grandparents tell her about coming to America and falling in love, their versions competing in narrative counterpoint—her grandmother Rose gives her the facts (“Grandpa came on a boat, like I did. It was terrible”) and her grandfather Sol exaggerates (“But what a welcome I got when I arrived. President Theodore Roosevelt rode his horse through a blizzard of ticker tape to greet me. 'Hello, Sol,’ he said. 'Mighty glad you could come’ ”). The book riffs on the difference between the stories the two grandparents tell while at the same time showing how much Julie loves both grandparents and both types of “true.” Kulikov never fails to amuse, whether he’s rendering a faded sepia photograph of Sol’s pushcart or the buttons Sol imagines he sold—“buttons carved from diamonds, emeralds, and rubies.... Buttons you could use as sleds in the snow.” His painting of Rose being watched by her five brothers (so “nobody [could steal] her away”) is especially irresistible, as is his homage to Chagall as the two young lovers float in the air behind their babies who ride down Hester Street in “hand-carved golden baby carriages.” Not to be missed. Ages 4-8.