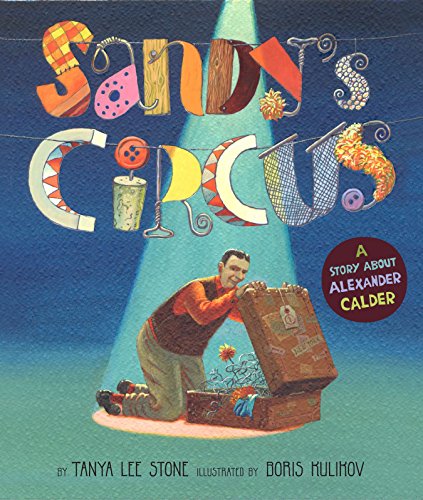 Stone ( ) gives top billing to a minor but well-chosen aspect of Alexander (Sandy) Calder's distinguished career in a biography that kids can easily connect with. Her Sandy has not yet invented the mobile, but has combined a documented love of making things with a two-week stint drawing the Ringling Brothers circus for a New York paper: the next year, 1926, in Paris, his circus of miniature moveable performers is born. The author gracefully communicates the artist's resourcefulness and sense of play: “His huge hands worked with tiny pieces of wire, cork, cloth, buttons, yarn.... He twisted and shaped and curled and cut and curved until... Sandy was ready to put on a big-top circus show!” Kulikov ( ) experiments with proportion and scale. Elements are often shown in black-and-white, as if sketched out and superimposed on full-color paintings. Spreads bring readers eye to eye with diminutive circus actors as Calder's gargantuan-seeming hands reach out from the shadows to control them. A classical muse, paint palette in hand, floats over scenes of a giant, suitcase-toting Calder tromping between the shrunken black-and-white skylines of Paris and New York City. Suggestive of Calder's whimsy. Ages 6–up.