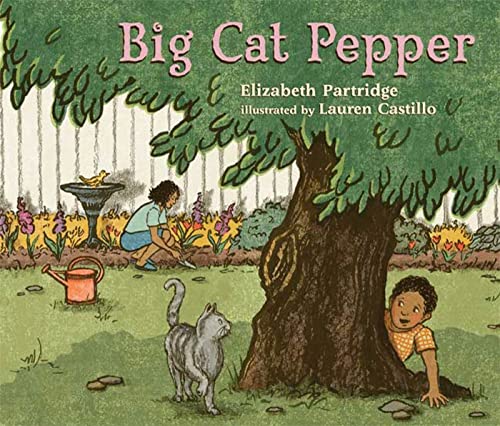 “Mama, me, and Pepper,/ always been this way/ Never been without him,/ even for a day,” says the young narrator in introducing the main characters of this rhyming story. But Pepper, a big tabby cat, is “way too old” and within a few pages, he dies. Partridge ( ) and Castillo ( ) don't try to smooth over or rush through the loss, giving their boy protagonist the respect his love and loss deserve (he comes to understand that Pepper will remain “always in my heart”). But the book doesn't make much of an impression. Castillo's mixed-media domestic scenes, rendered in muted tones and composed mostly along the same, prosceniumlike plane, provide reassurance and emotional ballast for both the narrator and readers, as the boy and his mother care for the cat during its final days and bury it in the flower bed. The problem lies with Partridge's singsongy rhymes, which lack even a glimmer of plainspoken eloquence. Passages like “Evenings are so lonely,/ bedtime is the worst./ So full-up with sadness,/ I think I'm gonna burst” feel pat and halfhearted. Ages 3–8.