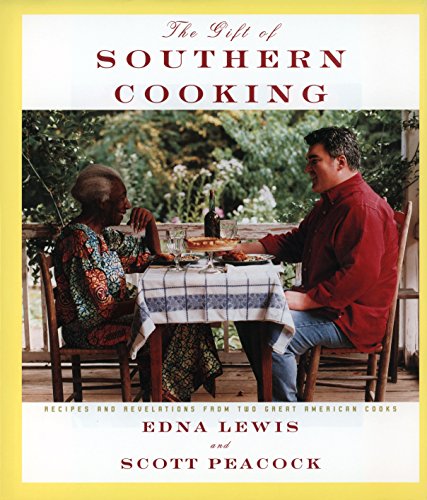 THE GIFT OF SOUTHERN COOKING: Recipes and Revelations from Two Great American Cooks

Lewis (), grande dame of Southern cooking, has at last come out with a cookbook explicitly devoted to the traditional cooking of the American South. Authenticity is always an issue in southern cooking—each state has its fiercely held opinions and sacred recipes—but Lewis and her young friend and protege, Scott Peacock, have unbeatable credentials. Peacock, a restaurateur, is from Alabama, Lewis from Virginia, so their culinary reach extends from the Tidewater to the Gulf. They have decades in the kitchen between them and have been cooking together since 1988; indeed, much of the book's charm rises from their heartfelt friendship and mutual respect. Though the book is written in Peacock's voice, nearly every page offers anecdotes and instructions from "Miss Lewis." These are mouthwatering recipes, conceived with integrity (there's even a recipe for your own baking powder if, like Miss Lewis, one is habitually suspicious of industrial food) and include a panoply of classic southern favorites: Cornbread-Pecan Dressing , Old-Fashioned Creamy Grits, Country Ham Steak with Red-Eye Gravy, Hot Crusty Buttermilk Biscuits, and Southern Greens Cooked in Pork Stock. But as if to prove that the Southern kitchen does not begin and end with the pig, several more modern innovations appear: Sauteed Frogs' Legs with Brown Butter and Capers, Silken Turnip Soup, Chanterelles on Toast. The rest of the country owes its thanks to this unlikely pair for bringing Southern comfort back to everyone's table; and so, as one chapter puts it, "Praise the lard and pass the biscuits."