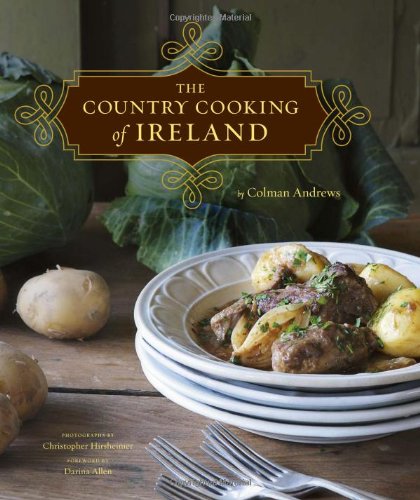 The Country Cooking of Ireland

Known for its scenic landscape rather than its gastronomic prowess, Ireland has never been considered a major force on the world's food stage. Until now, that is. Andrews, co-founder of magazine and author of and , provides new perspectives on the often maligned Irish cuisine. The breathtakingly beautiful photographs are alone enough to convince, but Andrews, calling Irish cuisine one of the most exciting food stories in the world today, lets the dishes make his case. Robust soups such as butternut and apple and roast pork belly start the mouth juices flowing. Andrews offers a culinary feast with everything from nested eggs and steak-and-kidney pie to Arlington chicken liver pâté and battered sausages. Given its proximity to the ocean, fish and shellfish dishes are well represented, including mussels in cream and monkfish in beer batter. Must-have traditional dishes are also well spoken for in “The Best Shepherd's Pie” and Guinness cake. Andrews has done the near impossible in elevating a cuisine thought to be humble and drab into tantalizing fare that will have world-wide appeal.