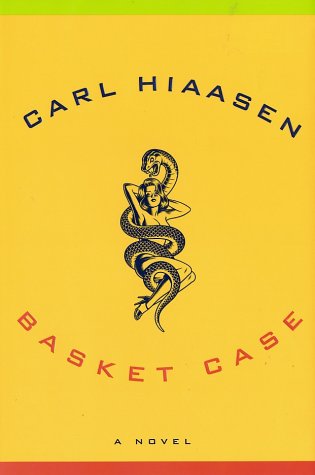 Hiassen gets back to his roots with this (almost) straight-ahead mystery, but doesn't skimp on the funny stuff as he follows the adventures of Jack Tagger, down-on-his-luck journalist relegated to the obit beat at a smalltown Florida daily. While researching a death notice, Jack stumbles by accident upon an actual news story: former rocker Jimmy Stoma has drowned while diving in the Bahamas, and his widow, wannabe star Cleo Rio, can't convince Jack that his death was accidental. The mystery offers Jack a way out of his job-related death fixation ("It's an occupational hazard for obituary writers—memorizing the ages at which famous people have expired, and compulsively employing such trivia to track the arc of one's own life") and toward his increasingly lusty feelings for Emma, his 27-year-old editor (" 'Bring whipped cream,' I tell her, 'and an English saddle' "). But when things turn violent and Jack suddenly has to defend himself with a giant frozen lizard, he enlists the help of his sportswriter friend Juan Rodriguez and teenage club scene veteran Carla Candilla to try to find out why someone is killing off has-been sleaze rockers. A hilarious sendup of exotic Floridian fauna in the newspaper business, the novel offers all the same treats Hiassen's fans have come to crave. What makes this book different is its first-person, present-tense narrative style. Unlike previous capers, which were narrated in the omniscient third person, this book settles squarely in the mystery genre from whence Hiaasen's fame (; , etc.) initially sprang. Despite the absence of perennial Hiaasen favorite Skink, this should make an easy job for Knopf's sales force even easier.