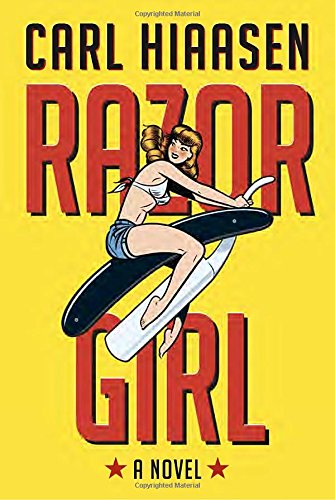 At the start of Hiaasen’s breezy, enjoyable sequel to 2013’s Bad Monkey, Lane Coolman, a Hollywood talent agent, is driving from Miami to Key West to keep an eye on Buck Nance, star of Bayou Brethen, a reality TV show, when his rental car is rear-ended by an attractive crash-scam artist, Merry Mansfield. Coolman ends up kidnapped, while Buck incites a riot at a Key West bar. Meanwhile, a Bayou Brethren fan, desperate to impress his TV hero, goes too far when he attacks a tourist. Aided by Merry, Andrew Yancy, a lowly health inspector looking for a way to get his job back with the sheriff’s department, seizes the chance to solve a murder case in which Buck, who goes AWOL from his show, is a suspect. Add a few Gambian pouched rats, a New Jersey mobster, a businessman selling stolen sand, and reprehensible neighbors to the fast-paced plot, and readers will be hoping that Yancy and the other quirky denizens of Hiaasen’s Florida will soon be back for another screwball adventure. Author tour. 300,000 first printing. Agent: Esther Newberg, ICM. (Sept.)
close
Details