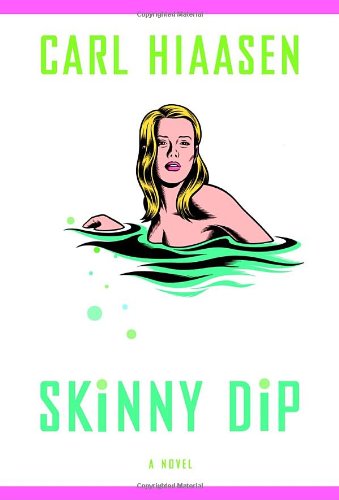 Hiaasen's signature mix of hilariously over-the-top villains, lovable innocents and righteous indignation at what mankind has done to his beloved Florida wilderness is all present in riotous abundance in his latest. It begins with attractive heiress Joey Perrone being tossed overboard from a cruise ship by her larcenous husband, Chaz—not for her money, which she has had the good sense to keep well away from him, but because he fears she is onto his crooked dealings with a ruthless tycoon who is poisoning the Everglades. But instead of drowning as she's supposed to, Joey stays afloat until she is rescued by moody ex-cop Mick Stranahan, a loner who has also struck out in the marriage department. Then the two together, with the unwitting aid of a suspicious cop who can't pin the attempted murder on Chaz, hatch a sadistic plot to scare that "maggot" out of what little wit he has. Even Tool, a hulking brute sent by the tycoon to keep an eye on Chaz, eventually turns against him, and much of the fun is in watching the deplorable Chaz flounder further and further in the murk, both literally and figuratively (Chaz's job, as the world's unlikeliest marine biologist, involves falsifying water pollution levels for the tycoon). Hiaasen's books are so enjoyable it's always a sad moment when they end. In this case, however, sadness is mixed with puzzlement because the book seems to end in mid-scene, with Chaz in trouble again—but is it terminal? We thought at first there were some pages missing, but Knopf says that was the ending Hiaasen intended. Odd.