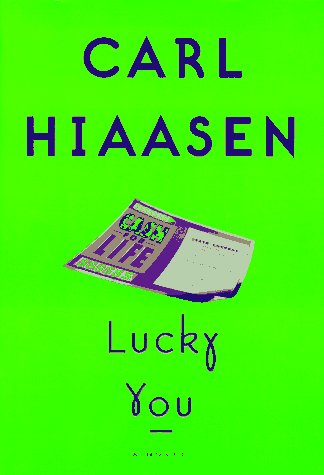 The Florida jokester has come up with his funniest caper yet in this novel about a lottery winner and the evil attentions she attracts from some of the grungiest lowlifes ever to see print. JoLayne Lucks is a cheery vet's assistant in tiny Grange, Fla., with a tender disposition and a no-nonsense attitude toward men. Into her life falls a winning divided lottery ticket worth $14 million, which she treats so nonchalantly that the town, desperate for a little attention for some reason other than its weeping Virgin Mary statue and a man who has drilled stigmata through his hands and feet for the Christian tourist trade, can hardly tell whether she won or not. (JoLayne actually wants to use the money to buy a local wilderness area and keep it for its resident wild creatures.) A newspaper reporter, Tom Krome, gets on the story, and so, unfortunately, do Bodean Gazzer and his friend Chub, the heart (and only members) of an ""anti-gummint,"" white-supremacist, Bud-guzzling militia who, when not spreading their gospel, are respectively poaching lobsters and counterfeiting handicapped parking stickers. This unsavory pair also won on the split ticket with JoLayne; but figuring that she, being black, doesn't deserve her half, they take it off her. JoLayne's efforts, with Tom's help, to get the ticket back are the heart of the story. But it also expands to embrace holy turtles; Virgin malfunctions; Tom's wife, who will do anything to escape being served with divorce papers; young Shiner, who wants to be a member of Bode and Chub's outfit; and the beauteous Amber, a limber waitress at Hooters cafe whose orange shorts set several hearts afire. The pace is crackling, the dialogue, especially among the rednecks, is fall-down funny, and the spirit is sweet and offbeat. 200,000 first printing; BOMC and QPB alternates; Random House audio. (Nov.)
close
Details