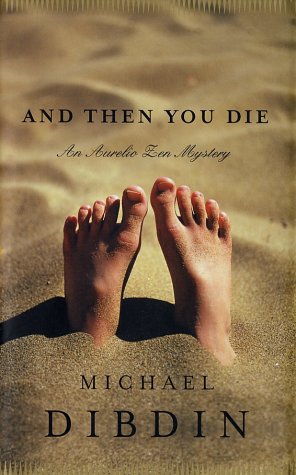 AND THEN YOU DIE: An Aurelio Zen Mystery

In Dibdin's eighth diverting mystery to feature Aurelio Zen of Rome's elite Criminalpol unit, the hard-to-kill detective is still recuperating from his last adventure, (2000), which left him with a collapsed lung, broken ribs and various minor injuries. Zen has been given a new identity and use of a beachfront home in Versilia, a Tuscan coast resort town, while he awaits the beginning of a Mafia trial in America—a trial where he's supposed to be a surprise, and key, witness. Dibdin's wry humor is perfect for Zen's diffident approach as he stirs himself to rejoin the living, even attempting a casual beach flirtation. Zen's enforced idleness chafes, then evaporates as people too near him begin to die and the new strategies developed to conceal him seem to have (almost) fatal flaws. Dislocations and relocations send Zen to a prison island and then on an abortive journey to America with an unexpected and comical detour. More than one terrible fate may be in store for Zen even if he survives the repeated attempts on his life: being forced to retire or shunted off into some harmless bureaucratic niche to molder away. This is a slight, but enjoyable morsel of a book—easily devoured but with subtle flavorings that linger pleasurably. Zen's casual demeanor masks a shrewd mind, one that readers should enjoy seeing return to action.