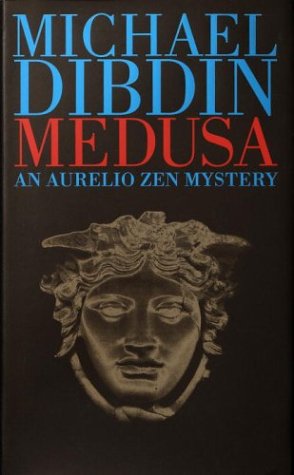 The ninth outing for Dibdin's Italian cop Aurelio Zen ranks right up there with such earlier triumphs in the series as and . The theft from the morgue of a partially mummified body, originally discovered in an abandoned military tunnel in the Italian Alps, aggravates the adversarial relationship between the Italian defense ministry and the Criminalpol, for whom Zen works under the interior ministry. When Zen gets on the case, the make it clear that they don't want the investigation to continue. Undeterred, Zen travels to the crime scene in the Dolomites. He quickly learns that the corpse's arm bore the tattoo of a Gorgon, a distinguishing mark of a covert 1970s paramilitary cell called Operation Medusa. Seeking other surviving members, Zen learns that one of the four was killed 25 years earlier in an airplane explosion, though no remains were recovered. Another is suddenly blown up by a car bomb. Of the two remaining members, one has strangely disappeared, and the last, now a top defense ministry agent, has strict orders to "clarify the situation" by any means necessary. As Zen races all over northern Italy in pursuit of justice, the take increasingly drastic measures to ensure that the dead stay buried, along with the truth. As always, Dibdin shows us in vivid, elegant prose the sociopolitical situation in Italy. The result is a slyly intelligent page-turner by a contemporary master of the form.