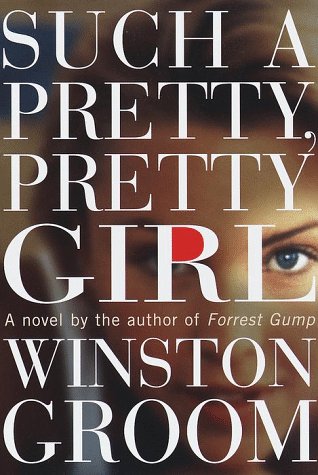 Such a Pretty, Pretty Girl

Groom (Forrest Gump) seems to have followed his best-known creation to Hollywood: if for Forrest ""life is like a box of chocolates,"" for the protagonists here, life is like an old-fashioned detective thriller, replete with stock characters, stagey settings and convenient plot twists. ""Drop-dead gorgeous"" Delia Jamison is an L.A. television news anchor who has loved, and left, an astonishing array of men. When Delia starts to get threatening sexual letters and calls, she enlists the help of a sympathetic (and still-smitten) ex, Groom's narrator, screenwriter Johnny Lightfoot, who plunges into the investigation with amateurish enthusiasm and remarkable self-delusion. Delia is duplicitous and manipulative; she withholds key information from Johnny, from her husband Brad and from Brad's best friend, Rick, who owns ""a big detective agency,"" yet welcomes Johnny's sleuthing (here, as elsewhere, Groom's desire to pay homage to 1940s Hollywood trumps probability and psychology). Groom invests Johnny's narration with Chandlerian cliches: ""One thing was for sure, though--Delia was a woman of impenetrable contradictions."" Seemingly everybody Johnny meets or knows reminds him of an actor in an old film (one fellow once ""resembled a young Charlton Heston, but now he looked more like Sydney Greenstreet in Casablanca""), which comes off not as a tribute but as lazy characterization. Johnny eats good food, drinks fine wine, smokes premium cigars and plods gamely along until he stumbles across the solution to Delia's troubles, long after most readers will have figured it out. Groom winds up with a goofily violent climax, but this final action is hardly worth the price Johnny, and readers, have paid to get there. Ad/promo; BOMC and QPB selections; author tour. (Mar.)
close
Details