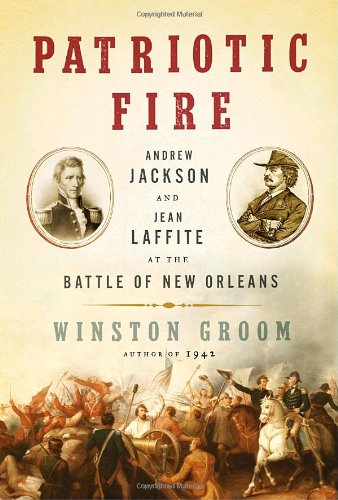 Patriotic Fire: Andrew Jackson and Jean Laffite at the Battle of New Orleans

Groom is a novelist ( ) and popular historian, with a string of well-reviewed books on war (e.g., ). A diligent researcher, he nevertheless has no pretensions as a scholar. His strength is a remarkable ability to recreate and revitalize events long considered familiar. He's best at structuring his narrative around personalities, and the Battle of New Orleans offers him a colorful cast. Andrew Jackson was a backwoods politician wearing the epaulettes of a general. Smuggler and buccaneer Jean Laffitte rejected a British bribe to become an American patriot. Around them coalesced a hard-bitten army. Five thousand regular soldiers and militiamen from Tennessee and Kentucky; free blacks and Creole aristocrats; displaced Acadians; gunboat sailors and pirates turned artillerymen—all confronted twice their number of British, most of them veterans of the Napoleonic Wars. At stake was New Orleans and the Mississippi River basin: the developing heartland of an expanding nation. Groom is defensibly hyperbolic in describing Jackson's unexpected victory as the wellspring of a pride and patriotism that endured into the 20th century. His vivid account of how that victory was won merits a place in both public and private collections. Photos, maps.