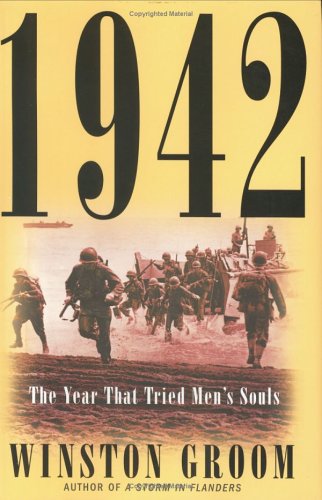 novelist Groom offers another of his nonfiction labors of love, centering his story of a pivotal year on the war against Japan. No revisionist, Groom delivers the traditional worshipful portrait of General MacArthur while admitting he made several key blunders that doomed the Philippines in the year's early months. In May the two fleets met in the Coral Sea. While the Japanese came out ahead, they abandoned their invasion of New Guinea, and Groom follows the standard account of calling it an American victory. He adds that brains and luck win more battles than courage, providing a perfect illustration in Midway, fought in June 1942. Having broken Japan's naval code, American forces surprised a vastly superior Japanese fleet and sank all four of its carriers. In August, the First Marine Division was deposited on an obscure island, Guadalcanal, then hastily retreated. For the next four months, in what is the book's highlight, the marines fought with epic heroism against repeated efforts to expel them. Almost as an afterthought, Groom shows American forces taking their first step against Germany, landing in North Africa in November and quickly bogging down. Heroism was not in short supply, but much of it occurred in 1943. A talented writer, Groom has written a page-turner; readers needing an introduction will love it.