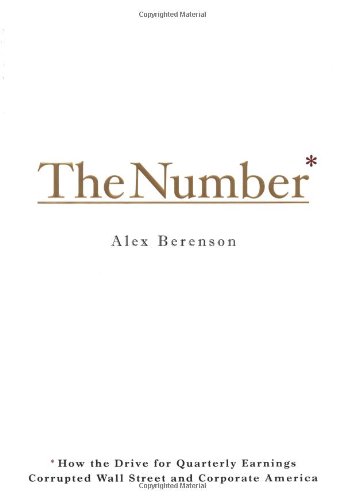 THE NUMBER: How the Drive for Quarterly Earnings Corrupted Wall Street and Corporate America

In the wake of Enron's spectacular implosion, the scandals surrounding the collapse of Tyco's stock price and revelations that WorldCom inflated its earnings by $9 billion, many wonder how independent auditors could have overlooked such huge discrepancies in financial records. Others ask how the SEC failed to spot corporate fraud and errors of the accounting firms on such a scale when reviewing the annual reports. reporter Berenson provides eye-opening answers to these and other equally disturbing questions in this hard-hitting and well-documented study. Against a background of the decline in independent investment research and the shift in client base for investment houses from individual investors to corporations, he charts the ascent of earnings per share—"the number"—to measure companies' health. As stock options became a major element in executive compensation and the consulting role of audit firms increased while the SEC neglected to pursue fraud on any major scale, Berenson argues, corporate executives' motives to manipulate "the number" met with a perfect opportunity to defraud unsuspecting investors, and many couldn't resist. His coruscating portrait of the boldness and reach of corporate fraud over the past five years is a clarion cry for reform. But his discussion of the SEC's shortcomings—due to lack of staff and budget in 2001, it could audit only 2,280 of the 14,000 annual reports received and has investigated a mere fraction of all allegations of fraud in corporations—shows the agency, created to protect investors from exactly what's happened, in the direst state of emergency.