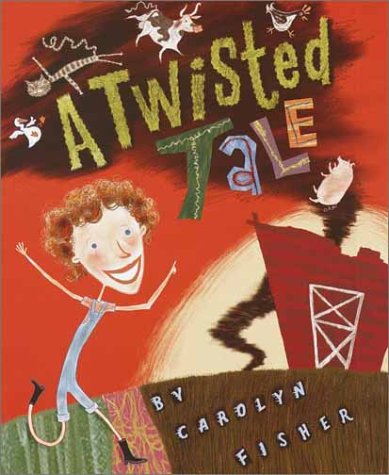 Fisher's () farm-girl-versus-tornado story veers off into new, hilarious territory. "The wind howled like a prom queen steppin' on a cow patty," and after the twister picks up Bailey Tarbell's farm animals, it drops them to the earth transformed: the cow sits on the chicken's nests and the chickens wallow in the mud. In an attempt to set things right, Bailey and her parents (who favor the duo) model nest-sitting and bone-chewing for their chickens and dogs, while a Freud look-alike counsels a wild-eyed cow on the couch. When hypnosis and psychotherapy fail to help her livestock, Bailey loads them onto carnival rides, including the Twister, which proves to be the antidote. Fisher's inventive, vivid paintings amplify the story's silliness. The artwork exploits every opportunity for humor with nonsensical perspectives, comic exaggeration and even careening typography. For instance, in the word "farm," plants sprout from the "f" while plowed fields comprise the "r." The mooing ducks, deliciously eccentric artwork and sly cultural references will entertain children of all ages. Ages 4-8.