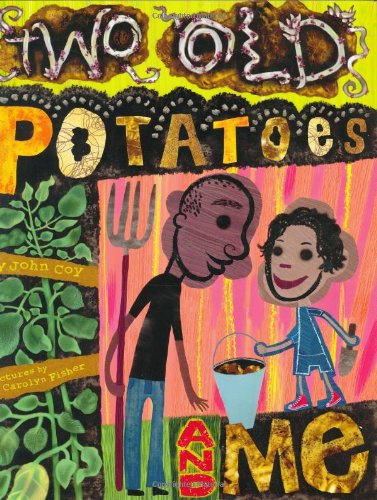 TWO OLD POTATOES AND ME

In this sanguine gardening tale, 67 new potatoes and a warm father/daughter rapport grow out of two inedible spuds. "Last spring at my dad's house, I found two old potatoes in the back of the cupboard," says a girl, holding the desiccated, sprouty lumps. She sticks out her tongue and pronounces them "gross" (spelled out in cubes along the left border), but her father thinks they have potential. Step by step, the girl explains how she and her dad till the soil, carve the potatoes into chunks and plant them sprout-side-up. In June, they find "violet flowers" on the young plants. "When we watered, I accidentally sprayed my dad with the hose," laughs the girl. In July, potato bugs invade, and in August the leaves dry in the sun. "We weeded./ We watered./ We waited," the narrator says, and Fisher () spells out the alliterative words in sinuous alfalfa sprouts, wavy blue liquid and clumpy earthworm tunnels in gray-brown dirt. By September, the girl's hair is longer and a crop of potatoes lies underground. Coy () hints that the girl and her father make productive use of limited time together: "How's your bedroom at your mom's house coming?" the father asks as they take a break from gardening. Fisher hand-prints the text for a casual, crayony look, and her unique multimedia compositions feature loamy dark browns, rich greens and denim blues. This well-realized story brims with affection and satisfyingly concludes with a recipe and a buttery bowl of mashed potatoes. Ages 5-8.