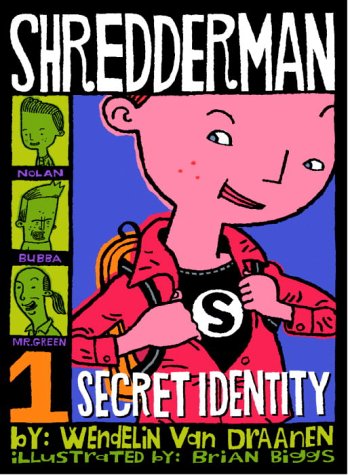 Van Draanen ( ; the Sammy Keyes mysteries) launches a one-man "Revenge of the Nerds" for the elementary crowd with this first in the Shredderman series. This quick-moving, often comical, story stars narrator Nolan Byrd, a likeable fifth-grader short on friends and self-confidence. Ever since Bubba, the class bully, deemed him "Nerd" (short for "Byrd-the-Nerd"), the name has stuck. When Nolan's teacher assigns a project to write a newspaper article on any topic they like ("Is there something that you feel very angry about? An injustice you see in the world?"), the boy decides he will focus his report on Bubba. He exposes the tyrant's wily ways by rigging up a digital camera in his backpack so that he can surreptitiously photograph Bubba's devious deeds. After the ploy works (Nolan snaps the bad boy dumping a trash can onto the floor) he begins to worry about the repercussions once all the projects were displayed in the classroom ("When Bubba saw it, he'd pound me!"). So the clever kid decides to build a Web site using the "secret identity" of Shredderman, in order to post further evidence of Bubba's bullying ("All Bubba, All the Time"). The reactions of his teacher and classmates will be as gratifying to readers as they are to Nolan. The narrator's confidence gets a big boost as he realizes that in his new "superhero" guise he can "fight for truth and justice." Kids are likely to log on to subsequent tales. Ages 7-10.