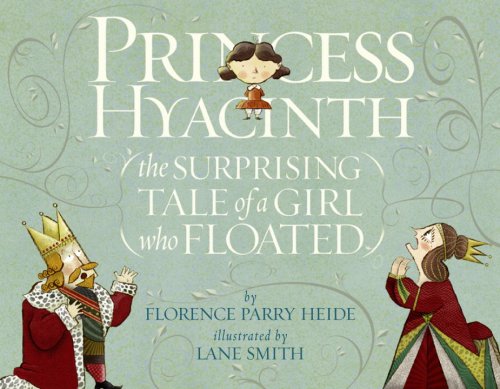 Princess Hyacinth (The Surprising Tale of a Girl Who Floated)

While Heide's celebrated Treehorn found himself shrinking, her new Princess Hyacinth floats. The delight to be found in both books is not in explaining why these fantastical things occur, but in how children with even the most unusual problems solve them in ways that adults cannot imagine. To keep her from floating away, Hyacinth's protective parents have literally weighted her down with diamond pebbles and a crown with “the heaviest jewels of the kingdom.” Smith pictures Hyacinth yearning for freedom as she sits in her bathing suit watching swimmers while belted to a heavy bench, or stoically drags her heavy clothing around the castle. The quirky oil and watercolor illustrations seamlessly match Heide's wry, understated text, and when Hyacinth eventually does float away, it's her soul mate, named Boy, who lends a hand and opens a new, freer chapter in her life. Heide possesses the ability to tell a moralistic tale without a hint of didacticism and makes this singular tale seem like the story of every girl who meets a boy, shedding the protective rules of her parents in exchange for a life where she is “never bored again.” Ages 4–8.