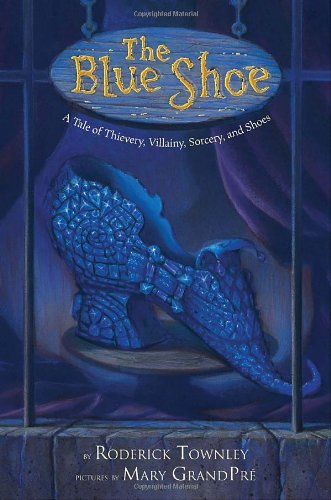 The Blue Shoe: A Tale of Thievery, Villainy, Sorcery, and Shoes

Townley's ( ) overly complicated fantasy stars 13-year-old Hap Barlo, a smart, nimble-fingered cobbler's apprentice who is also an unwilling thief. The slippery story line is founded on a mysterious bejeweled blue shoe in a cobbler's window in the town of Aplanap, but the action soon begins to alternate between Aplanap and a prison in a faraway mine, where the prisoners (in a plot element reminiscent of ) daily dig deeper toward some unknown purpose. The enormous cast of characters includes a pompous mayor and his greedy wife, a good-hearted cobbler and his hungry dog, an evil prison warden, a feisty, fearless girl with a crush on Hap, and numerous, hard-to-distinguish Aukis, a blue-skinned, human-hating race with an almost-human language (in which Hap is fluent—a skill that proves crucial). GrandPré's (the Harry Potter series) b&w illustrations create an appropriately furtive ambience and partner well with the tongue-in-cheek narrative voice. The convoluted plot culminates in a predictable frantic battle scene in the mine, but the mystery of the blue shoe and other aspects of the saga are not fully resolved until the story returns to Aplanap. Ages 8–12.